A good carpenter does not need to be an IT expert. With specially tailored smart helpers, the HOMAG Group also brings digital transformation to small workshops.

Good organization is the key to successful work in the carpentry workshop. Boards, trim panels and fittings need to be in the right place so they are always close to hand. Machining must also be organized efficiently.

HOMAG’s digital assistants support carpenters in this. “The apps are specially tailored to the needs of small workshops”, says Hendrik Albers, Head of Digital Product Innovation at the HOMAG Digital Factory. It is in this department that HOMAG’s digital solutions are conceived – whether for customers with one, 1,000 or 10,000 staff. The company, part of the Dürr Group, is the world’s largest manufacturer of machines and equipment for the woodworking industry, where digitalization is already well advanced. This expertise also benefits smaller woodworking shops.

While software for large industrial companies involves complex networking and highly automated processes, the primary focus for carpenters is on the uncomplicated use of digital helpers. This is why the new HOMAG apps are easy to operate and require no expensive IT system. In fact, woodworking shops can decide for every single workstation in their workshop whether to retrofit it with a digital module. All that is initially required in the workshop is the Internet plus a tablet or PC.

Show me my cabinet
Selling is made easier for carpenters with the → cabinetCreator. It can be used during customer meetings to bring together the material, colors and fittings of a cabinet on the screen. It takes just a few clicks to create a virtual piece of furniture, just as the customer wants it. In addition, the carpenter can see parts lists, CNC data and everything he needs for the subsequent production. The data can be transferred to the productionManager app. This digital job folder replaces the working documents in the workshop and always knows the updated order status. The data stored there can be used in the subsequent work stages.

No more human calculation errors when sawing
Owners of small workshops can also digitally optimize the cutting of panels, something that is already the norm in larger industrial companies. After all, up to a quarter of the material is wasted during sawing or milling. Any human calculation error can cost the business money. And let’s not forget that less material also means less impact on the environment. The → intelliDivide software works out the best way to cut the material and gives the machine operator a choice: minimum machining time or rather minimum offcuts? Within seconds, the app has calculated up to 15 cutting options. “It’s so fast because the results are calculated in the cloud with high processing power and on several computers simultaneously”, explains Albers. In addition, a printer spits out labels with barcodes for all parts that have been cut so they can be clearly identified. In this way each item is given the information it needs to be processed by the next machine.

Now we don't suddenly run out of edgebanding anymore.

The engineer and master carpenter discovered materialAssist Edge at a trade fair. He especially appreciates the fact that the digital helper is so user-friendly.

Digital edge management instead of pen and paper
To seal the unsightly panel edges, some workshops store a large selection of edge banding in many different colors and materials. If one type is missing, the order cannot be completed. “Many workshops don’t have a clear overview of their stock or, at best, they might be working with stock lists”, says HOMAG expert Albers.

Thanks to the → materialAssist Edge application, this is now a thing of the past. The app manages the edge banding stored in a special rack. The carpenter simply selects all edges to be processed using his tablet. An LED light shows him in which shelf space the relevant edge banding can be found. He can also see whether stocks are sufficient.

It takes time to sort all parts and prepare them for assembly or packaging. This is where the productionAssist Sorting comes in. The carpenter scans the label using a glove that includes a barcode reader. In the blink of an eye, the software suggests the optimal storage location in a special sorting rack and guides the carpenter to the right shelf space using an LED light. Once all the parts for a piece of furniture have been sorted, the app gives a signal. The assembly or packaging of the finished piece of furniture can begin.

Further information is required for the assembly. What parts and fittings are needed? HOMAG’s → assembly assistant provides the answer. Within seconds, it shows drawings and the corresponding components, among other things. It lists all the furniture ready to be assembled and indicates the storage location of the parts. That way, assembly errors hardly ever occur.

Carpenters must have a grasp not only of the furniture and the material but also of the tools. Which tool to use depends on the material to be processed. “Plexiglas calls for a different saw blade than chipboard”, says Hendrik Albers. HOMAG’s → toolManager knows which tool is right for the job and whether it is available, and shows e.g. how many meters a specific saw blade has already cut. It also signals when parts need to be replaced. As soon as the carpenter scans the QR code on the saw blade, the machine selects the necessary settings, such as the right speed.

Something for everybody
The wide range of user-friendly apps has the advantage that every business can choose its own rate of digitalization. The experts from the HOMAG Digital Factory are already working on the next digital helpers. In many cases, the workstations in a workshop are upgradeable. “The → materialAssist Edge, for example, assists in the management of edge banding and is therefore even independent of the machine that is used”, says Albers. If the carpenter uses HOMAG machines, the apps offer further benefits, such as direct data transfer to the machine or feedback to the digital assistant. Over time, individual digital modules will thus evolve into a fully networked workshop where people, machines and digital helpers communicate with each other. And where it is always tidy.

‹ Back to the overview page of the key topic "Driving Change" 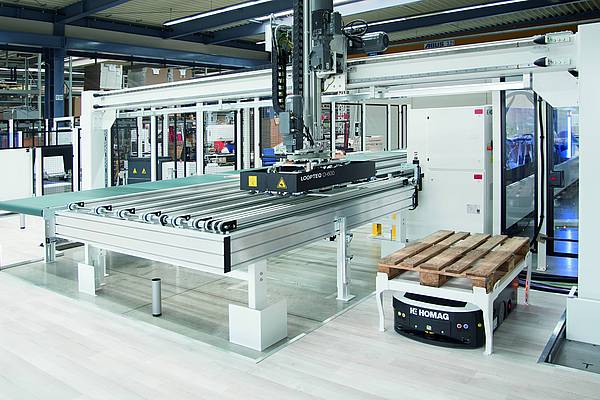 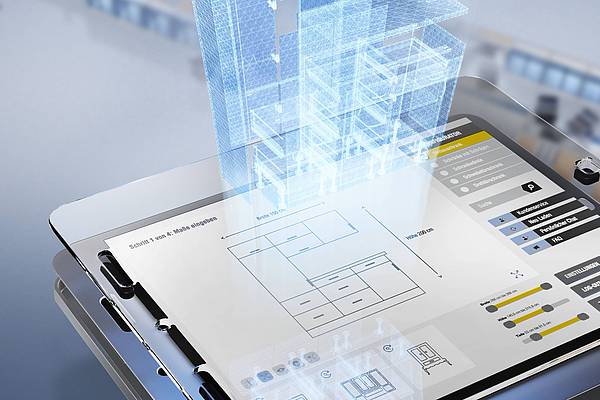