E-mobility is a great challenge for the automotive industry. Dürr provides efficient support to customers in switching to battery technology, as the following example of a project shows. A carmaker has built one of the first European battery assembly facilities. During this flagship project, Dürr Consulting provided significant support for three years.

Almost every carmaker is developing electric vehicles and offering some initial models. Studies show that demand for electric vehicles will grow sharply until 2025. This will lead to billions of euros being invested in battery production over the coming decades.

Battery assembly is a new, fast-growing business. Besides automotive manufacturers and mobility start-ups, suppliers also want to get involved here in order to tap into other business fields apart from the conventional power train. “The order from this European carmaker was therefore a great opportunity for us. Here we have laid the foundation for growing our expertise in the long term”, says Andreas Hohmann, Head of → Dürr Consulting, underlining the importance of this project.

With the order we have laid the foundation for growing our expertise in the long term. 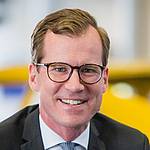 At the beginning of 2016, there were only rudimentary ideas and concepts. Therefore, the Consulting team, which initially consisted of eight people, had to get up to speed with the new topic of battery assembly. This knowledge and their long-term expertise in new builds and modifications enabled them to help the automotive producer.

The core elements were:

Alongside implementing these steps, the team also prepared the design of the battery module. Dürr Consulting’s focus was to develop manual and, above all, automated processes as well as technical specifications to achieve the target of 20 batteries per hour.

The concept implemented consists of five assembly lines with a total of 60 cycles. On line 1, among other things, robots apply the gap filler to the battery housing. This thermal compound transfers the cell module’s heat for cooling and smooths out any unevenness. Then the cell modules are inserted and screwed into place. Line 2 positions the high-voltage connectors, which connect all modules and thus create a total voltage of around 400 volts. Moreover, lines 2 and 3 are used to add further parts and cables, some of which is performed manually. Other automated steps are: applying sealing material to the trays and covers of the battery, as well as positioning covers and screwing them into place. On line 4, the carmaker’s employees carry out leak tests on the cooling system and the entire battery. On line 5, the battery undergoes end-of-line testing at several automated test stations, and is then charged.

Aside from production and safety concepts, the Dürr team also took care of technical details, assessed the supplier base, identified suitable suppliers, and managed the ramp-up phase of the systems. Since production began at the end of 2018, the team has supported the customer in increasing production to 20 units per hour, and in integrating new types of batteries into the production process.

Dürr Consulting has developed extensive competencies during the battery assembly project. The team is better placed to advise other customers involved in battery assembly business, be it on production strategy, market analysis or the question of how the product design should look in view of an efficient manufacturing process.

Are lithium-ion batteries the future?

The team of Dürr Consulting is looking ahead at the next few decades. It is particularly concerned with the question of whether today’s lithium-ion batteries will provide power for cars in the long term. “We don’t think so”, answers Andreas Hohmann, Head of Dürr Consulting. This is because lithium-ion batteries have some disadvantages. In an electric car with a 20-year life cycle, the total costs are 46% higher than in a vehicle with an internal combustion engine, based on current calculations. This is due to the fact that producing a battery is extremely costly, and batteries must be replaced several times during the life of the car.

Andreas Hohmann believes there are two other energy storage systems that offer greater benefits: the first is a solid-state battery, which will be ready for the market within the next five to ten years; the second is a fuel cell for heavy and mid-sized vehicles. For greater ranges, this is more climate-friendly than a battery.

From the carmakers’ point of view, manufacturing electric vehicles currently makes sense to avoid penalties that could be imposed as a result of more stringent CO2 emission regulations. “However, we believe that conventional lithium-ion batteries are only a transition technology on the path toward a green and sustainable automotive future”, predicts Andreas Hohmann. Nevertheless, Dürr Consulting will advise customers on the current path toward efficient and automated battery assembly – it certainly has the expertise.