When it comes to test systems for electric and hybrid drives, teamtechnik is a technology leader in the market. The company has been part of the Dürr Group since February 2021. We have talked to Ralph Heckmann, E-Mobility Head of Sales at teamtechnik, about the company’s recipe for success and its future prospects.

From 6-gear manual transmissions through to automatics and dual clutch transmissions, from hybrids through to full electrics – the teamtechnik test benches have already taken a few quantum leaps in drive technology. After all, the company has spent the last 25 years building systems which are used to put drive units through the most rigorous testing. Ralph Heckmann has been with teamtechnik for about the same amount of time. Among other things, he has supported the worldwide expansion of business in transmission testing technology and is now responsible for e-mobility-related sales.

The electric drive is one of the most important components in an electric vehicle. Therefore, every drive, once assembled, undergoes calibration and functional testing. teamtechnik specializes in the test systems and software for this. The test benches, which measure approximately two by six meters, are used to perform highly automated tests within just a few minutes. These determine parameters such as the mechanical and fluid variables, electrical properties, and efficiency of the e-drive. It is achieved by simulating real situations and environments, applying different loads, and communicating with the component’s electronics. “These machines we’re building are pretty complex,” says Ralph Heckmann aptly. 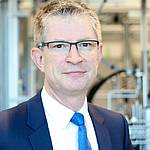 “In 2016,” he recalls, “we received the first large order for an end-of-line test bench for e-drives.” Today, teamtechnik systems can be found in the biggest testing areas in the United States, China and Europe – and the reference list includes well-known customers.

Where does the rapid success come from? “Our test benches are built on decades of experience,” says Ralph Heckmann. teamtechnik specializes in the end-of-line testing of hybrid and e-drive units as well as their components. These include electric motor, transmission unit, and inverter, and – for hybrid drives – the hydraulic controls. The highly automated systems are used wherever the units are assembled, and subsequent calibration and functional testing are performed. They simulate the component’s functional situation, supply it with media and energy, and measure its relevant properties.

teamtechnik draws on its know-how not only when further developing the hardware. The company’s software, developed in-house, is also one of its strong points. It controls the processes and assesses the suitability of the component based on the measured parameters. The testing software has now become the most important element of the systems and is highly complex due to the diverse requirements, such as the simulation of vehicle communication. “Nevertheless, it can be adapted and operated by our customers even without extensive programming knowledge,” the Head of Sales points out. This is well received in the market.

teamtechnik has managed to transfer its expertise in conventional drive technology to the new mobility trend. Today, the company is the world market leader in testing technology for electric drives.

Customers include not only traditional automakers and e-mobility start-ups but also tier-1 suppliers, since many OEMs are (still) buying their drives from third parties. Ralph Heckmann notes how this brings great variety to his work. E-pioneers, in particular, want to launch their products quickly and avoid long lists of demands. “They prefer, instead, to rely on off-the-shelf functional solutions and on our expertise,” explains the 56-year-old. “This is why we are currently working on reducing project lead times and on standardizing our test benches even more.”

teamtechnik can be optimistic about the future because alternative drives are continuing to gain momentum. There are hardly any new projects now for conventional transmissions only; instead, hybrid technologies and all-electric solutions are being expanded. Ralph Heckmann currently sees great potential, especially in the US market. The fact that teamtechnik is now part of the Dürr Group also brings advantages: “Together, we can offer our customers a broader portfolio of solutions in the e-mobility area.”

‹ BACK TO THE DÜRR & MORE HOMEPAGE